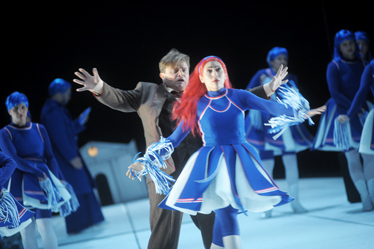 Based on Svatopluk Čech’s popular tales about Mr. Brouček (translated “Beetle”), which became very popular in the 19th century, the satirical opera ‘Výlety Pánĕ Broučkovy’ (The Adventures of Mr. Brouček) by Leoš Janáček (1854-1928) was finished between 1908 and 1917. Initially composed as a one act opera, a second act was added after the success of ‘Jenůfa’ in 1916. The Oper Frankfurt, for the first time in Germany, presents ‘Výlety Pánĕ Broučkovy’ in its original language.

In the first act, after a riot between two lovers, Mr. Brouček gets transported to the moon, which is colonized by artists and aesthetes. The second act, a patriotic statement at a time of Czech aspirations for a national state, sets Mr. Brouček in fifteenth century Prague amidst the holy wars between Jan Hus and the Holy Roman Empire. The first act mocks rarefied artists while the second act is a critic to those who vacillate at a time of national crisis. Not as known as other Janáček’s operas, and with no arias or ensembles for the singers to show off, this work, however, contains some beautiful music: the love music of the two lovers, the Brouček’s return from the moon, the choral parts…

The staging in Frankfurt by the German director Axel Wiedauer is quiet simple, but appropriate for the stories being told, sometimes reminding of a puppet show. Dutch tenor Arnold Bezuyen, who sings main roles in Bayreuth for many years already, displays an unbroken tenor strength and a fine variety of tones as Brouček. Furthermore, the Columbian and self confident soprano Juanita Lascarro and the American tenor Peter Marsh stand out in their multiple roles. Short but brilliant was the performance of the other dutch tenor, Frank van Aken, in the role of Svatopluk Čech, who appears briefly in the beginning of the second act. Van Aken is specially remembered in Germany for his Tannhäuser in Frankfurt and Bayreuth, a role which he will also sing in Baden-Baden next month.

Kapellmeister Johannes Debus (Germany, 1974) impeccably displays a broad variety of Janáček’s sounds with the Museumsorchestra and Opera chorus. The inclusion of operas like ‘Výlety Pánĕ Broučkovy’ among popular works in the companies repertoire is surely an example of why Oper Frankfurt was awarded the german “Best Opera House of the Year” prize a couple of years ago.